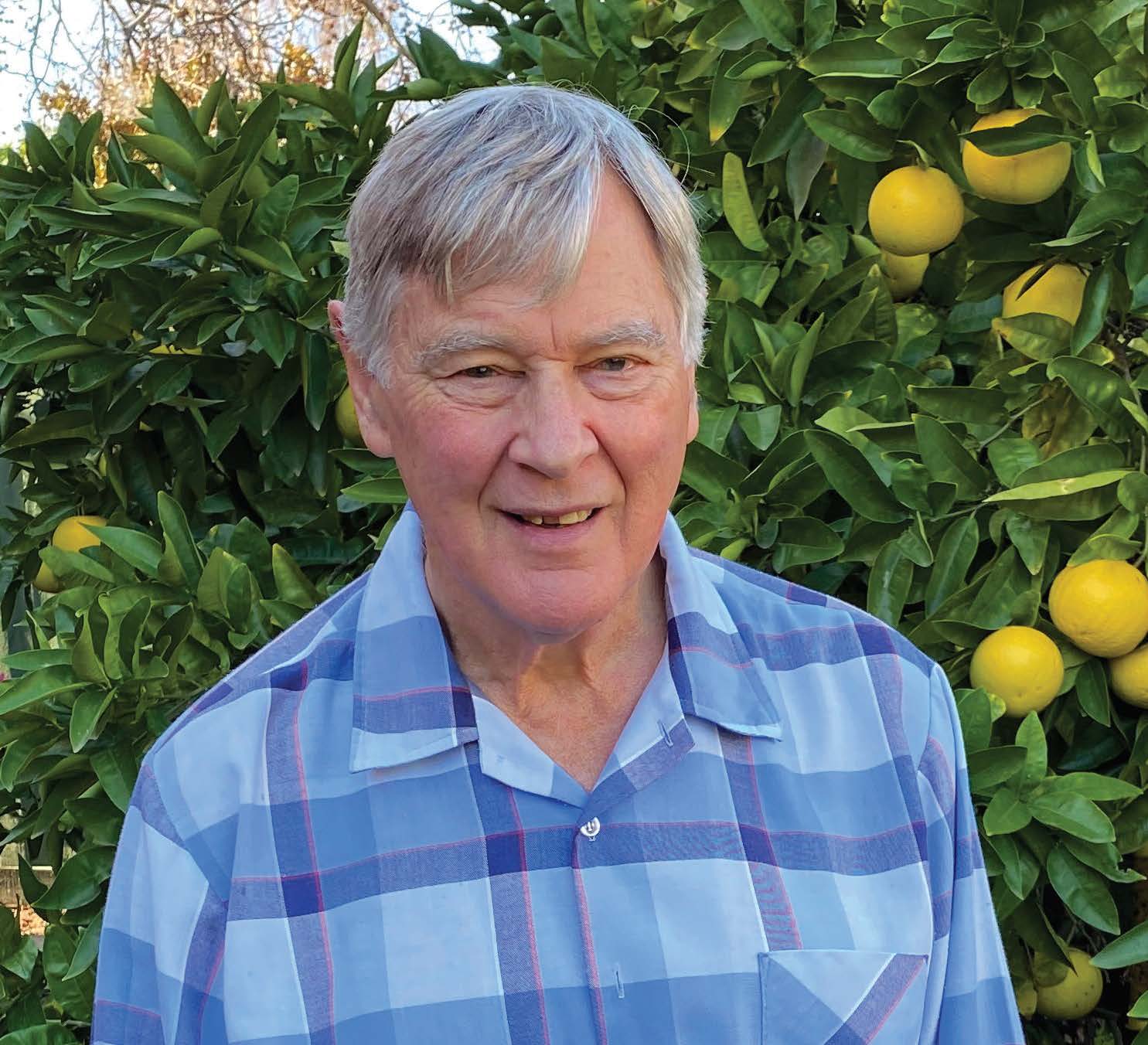 For Doug Brown, 2021 marks the end of his second term on the Board of Directors for Praxis Spinal Cord Institute. It also coincides with another honour, being named a Member of the Order of Australia in recognition of his significant service to medicine, particularly to spinal cord injury. As a physician with a forty-year career working in research, Doug sees a significant paradigm shift ahead and Praxis leading the way as a vehicle for change both in Canada and internationally.

‘Charity’ is not a word Doug thinks about in relation to Praxis. Instead he describes the Institute as a mechanism. “It’s a way of getting the focus on practical research, new discoveries, new information and devices that will improve people’s lives,” says Doug. ‘Charity’ and its close cousin ‘non-profit’ leaves the positive impact of the work out of the conversation. “It’s not climbing Mount Everest because it’s there. The end result is what makes a difference to people.”
Early in his career, Doug knew that spinal cord injury was an important area of research. The work was highly rewarding and challenging. “If the answers were easy then we would have them,” says Doug, “but the answers are achievable, especially with today’s technology.”

Born in Melbourne, Australia, Doug did his medical training at Monash University when it was new and full of young professors and innovative ideas. He then went to Austin Hospital for physician training and started research on renal bone disease, which lead to working in the spinal unit. Doug liked the long-term relationship with patients.

Opportunities kept coming his way, and he became the Director of the Victorian Spinal Cord Service. In 2011, Doug founded the Spinal Research Institute, where he currently serves as Executive Director. He was appointed President-elect for the International Spinal Cord Society (ISCoS) from 2012 to 2014 and served on the Prevention Committee as well. It’s a story of leadership. The formal ceremony where Doug was awarded Member of the Order of Australia took place at Government House earlier this year. It was out of the ordinary because of COVID, which changed expectations. “It was actually quite a special day,” says Doug. The Governor didn’t pin the medal on him – his wife did.

Even with the size of the honour, he’s humble. “I never thought anyone would even think of anything that I’d done was noteworthy,” says Doug. “It’s hard to see yourself as exceptional when you work with such exceptional people.” One of Doug’s mentors was Sir George Bedrock, a medical doctor, surgeon and past-President of ISCoS (1980 to 1984). He was also the driving force creating the Australian Paralympic movement and Commonwealth Paralympic Games. 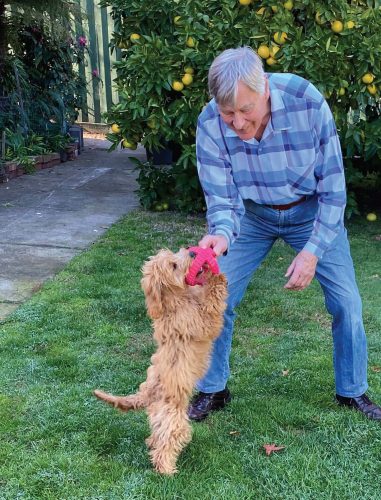 Doug with the family dog Ruby.

People need to appreciate that we can do so much better – with time and effort, brains and innovations – bringing together all that’s available, we can make a difference, and that’s what we need to focus on in spinal cord injury.

Spinal cord injury is devastating and there are obstacles in every area of one’s life. “It knocks you out of the race you thought you were in and the challenge can overwhelm some people,” says Doug. Innovations in treatment and technology make an enormous difference in people’s lives. Doug’s team in the Austin Hospital Spinal Unit introduced tendon transfers for quadriplegics, a procedure done successfully by others in Sweden and the US. They were able to give people not just the ability to extend their arm, but also to start getting hand function with grip devices. It made some people totally independent, so they didn’t need caregivers anymore.This was forty years ago. Today, technological innovation seems boundless. “People need toappreciate that we can do so much better – with time and effort, brains and innovations – bringing together all that’s available, we can make a difference,” says Doug, “and that’s what we need to focus on in spinal cord injury.”

For Doug, Praxis is an institute with the larger perspective of what’s needed. “What’s not working in research is the small view, where people protect their intellectual property – their research – to get their paper published, and therefore have a track record for the next grant,” says Doug. What sets the Institute apart is its major focus over the last few years on the commercialization of new techniques and devices. “That process, up until now, has been ad hoc – it’s just been dependent on a bit of luck if you get the right support,” says Doug. It’s an area that urgently needs support to translate good ideas into clinical trials, prove their value, get them commercialized and produced so they can be accessed by people with spinal cord injury. “Clearly it’s a need, and clearly we know from past experience you might miss,” says Doug. “In research, we chase a number of ideas, which won’t work out, but the one that does transforms things, and Praxis is in that boat.”

Praxis approach to reach out to people in other countries, other institutions and other organizations asking how we can work together really changes the paradigm of research.

Praxis has developed partnerships with countries around the world thanks to its commercialization focus. The Institute’s reach in this area, to bring the research of other countries to development and commercialization, has made it a leader in its field with an international presence not just for Canada. “British Columbia is the face of the world in spinal cord injury,” says Doug. Bringing back the impressive work with other countries, companies and institutions is good for everyone in Canada, and particularly British Columbia where Praxis is centralized.

Educating people with spinal cord injury in the commercialization process has been one of the greatest successes of the Praxis Commercialization Program. Greater awareness is growing about research, what the possibilities are and how people with spinal cord injury can be a part of it. It’s a different point of view from being the subject of a clinical trial. “They’re the stakeholder group who say ‘yes, that’s important,’ or ‘no, that wouldn’t make any difference to my life,’” says Doug. This applies to establishing protocols as well that are designed to facilitate their participation.

Meaningful participation by people with spinal cord injury in research has even greater benefits. They become the expert voice as they’re the ones who have a vested interest in the outcome. “If people with spinal cord injury are part of the research project, and it comes up with a statistically significant answer,” says Doug, “then who better to say to government or the policymakers, why isn’t this available? They’re the best advocates for implementation.”

When Doug was first asked to join the Praxis Board six years ago, he was, in his words, “pretty chuffed.” Even then, Praxis had the reputation for focusing on outcomes. “That’s the kind of perfect organization,” says Doug, “where there’s no disharmony, there’s no one going after their own track, and everyone is there for everyone, everyone is there for people with spinal cord injury.”

Over the next five years, the greatest challenge in spinal cord injury is to consolidate this collaborative vision, a paradigm shift, in the way funders and policymakers think and how the research community and people with spinal cord injury think. “Praxis is a very important Institute because it helps bridge the gap between an old way of thinking and a new way of doing things.”

Spinal cord injury affects every system of the body – it’s a big project and no one can do it by themselves. “The Praxis approach to reach out to people in other countries, other institutions and other organizations asking how we can work together really changes the paradigm of research,” says Doug, “– the way we work, the way we think, and how we can be more successful.” This is an evolution in thinking from the thousands of papers in scientific journals of research on spinal cord injury that never leave the page.

Read more Board stories: “Jerome So Knows About Giving Back.”